I’m sitting here watching Jasper jump and play, and I remembered back when I first brought him home. I didn’t know a single thing about this new little life I was about to be responsible for. I researched and learned everything I possibly could so that I could give him a healthy, happy home. What follows is some of the things I have learned about chinchillas.

Contents show
So what is a chinchilla?
Where did they come from?
Hunted
A quick word on chinchilla clubs

Chinchillas need a good diet to maintain their health.

Chinchillas are treat monsters. You must be careful when giving treats. Too many treats can cause health problems later on in life. Chinchillas can be given treats once they are 6mo old, no sooner. If you give the treats to young, it will upset their stomachs. Give treats very sparingly once or twice
a week. When giving treats only give two small pieces. When serving loose hay as a treat just give one small hand full.

So what is a chinchilla?

Chinchillas are a nocturnal animal of the rodent family; a male is referred to as a buck and a female as a doe. They are about 25 centimeters high and have large, thin ears shaped like those of a mouse, and long whiskers. Their general body shape is similar to that of a rabbit, and they have long back feet like a rabbit; their front legs are shorter, and their paws can be used as ‘hands’; their long furry tail is similar to a squirrels tail. On a standard chinchilla the body fur, which is beautifully soft and thick, is grey; but they are available in a variety of colors including black, beige, blue-grey, brown and white.

There are three varieties of chinchilla – Chinchilla Brevicaudata, Chinchilla Lanigera, and Chinchilla Costina.

Brevicaudatas were found at higher elevations (approx. 15,000 feet), they are larger animals, with a blunter nose and shorter ears and tails, pure Brevicaudatas show a brownish hue to their coats, and have more docile temperaments.

Costinas were found closer to sea level; they are smaller animals with a more pointy head and body, and longer ears and tails. Costinas are credited for contributing the blue hue found in a chinchillas fur; they are more highly strung than Brevicaudatas.

Lanigeras were found at approx 10,000 feet, their size and their characteristics fall midway between the Brevicaudata and Costina, and their original color ranged from bluish grey to a brownish color. The Lanigera is the domesticated chinchilla which is featured on these pages.

Where did they come from?

Chinchillas originally lived in South America in the Andes mountains, where they have been observed living in colonies at heights of up to 15,000 feet. When the Spanish pioneers discovered chinchillas in the 1500’s, they named them ‘chinchillas’ after the Chincas, who together with the Incas were one of the native people of South America.

Wild chinchillas live in colonies of up to 100 animals; most live in burrows however some make their home in crevices among rocks.

Unfortunately, wild chinchillas have become an endangered species. They were once found in Peru and Bolivia, but are extinct in those parts now, however populations of Chinchilla Lanigera can still be found in parts of northern Chile. In the past, they have also been found in the northwestern parts of Argentina. 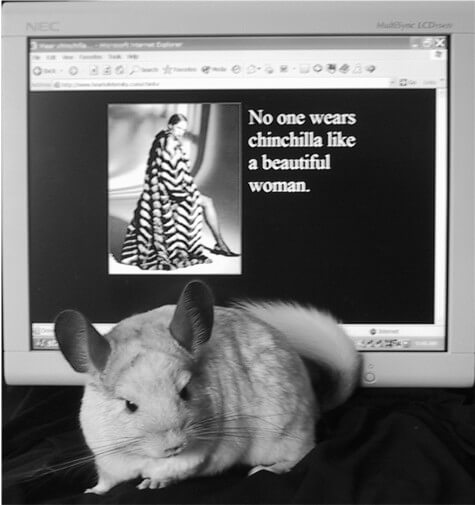 The chinchilla was hunted to near extinction in the early 1900’s, and most of the chinchillas in the United States today are descendants of 11 animals brought to California in 1923. These animals plus their descendants were bred for their pelts.

Over the space of 40 years pelting farms spread across the USA – many such farms still exist, and sadly even today chinchillas are bred in large numbers for the fur trade both in the USA and elsewhere. At least 100 pelts are required to make one coat, and in 1992, a domestic chinchilla fur coat on sale at Elan Furs (Indianapolis, Indiana) cost $22,000. A wild chinchilla fur coat would have been more expensive! Chinchillas have also been used for medical research, but today they are also kept as pets.

The picture on the right is reproduced with the kind permission of Alecia who owns the copyright. The beautiful woman posing in front of the monitor is Iris – I don’t know the name of the animal wearing the dead chinchillas!

A quick word on chinchilla clubs

There are those who advise members of a chinchilla club/society to benefit from the information they can send to members, however, some chinchilla societies are pelting organizations. Examples of American societies which are pelting organisations are the Mutation Chinchillas Breeders Association (MCBA) whose stated purpose is to “provide instruction on the humane care of chinchillas in their production and to help commercially market and promote all types of chinchilla pelts and products”; and Empress whose stated purpose is to promote “breeding of chinchilla for production and processing of chinchilla fur”. An example of a chinchilla club that does not support pelting is a British club, The National Chinchilla Society – the NCS accepts overseas members.

In my opinion, good information regarding the care of chinchillas does exist and does not *have* to be obtained by joining pelting organizations. To join such an organization is to support it, i.e., to support the breeding of a chinchilla, which will live a short life before being killed and made into an item of clothing. Therefore before joining an organization, you may wish to check whether that organization is involved in pelting – if it is then it may be preferable to look elsewhere.

Other than joining a chinchilla club there are many good websites containing detailed and accurate information regarding chinchillas – after browsing a few, I’m sure most novice chinchilla owners will be able to discern which sites are best to use as a reference. Forums are also a good source of information, for example the  (no longer active) has many members from around the world sharing their knowledge, and there are more than a few experts present to give advice to those needing it – the only thing asked in return is that visitors to the forum are polite when posting replies as young members are also present on the forum.

What does it mean when chinchillas wag their tails?

What is the Best Chinchilla Water Bottle?

Chinchilla Hurricane and Emergency Preparedness – Go-Bags And Beyond