In the wild Chinchillas live in herds of 100 or more, but that’s in the wild where they have huge open spaces. Chinchillas in cages are a different story altogether.

Contents show
Chinchilla Introductions
Tried and tested methods used to introduce chinchillas
My experiences
Same-Sex Cage Mates or Male/Female
Just One Or Do They Need Companions?
If I Have Multiple Chins Will They Bond With Me?
Snarling, Snaping and Spraying
How Long Does It Take For Them To Become Friends
Is it easy to introduce a new chin?

You can have as many Chinchillas live together that will get along, have adequate room in the cage (24″ x 24″ x 18″ per chin) and will not bring about unwanted babies! The chins that get along best for me when I put them in a trio are very young or older. Younger chins tend to get along better than chins that are even just a few months older. What I like to do is wean my babies into cages with a few other babies. That way I can teach them to get along with other chins from the beginning.

Very old chins tend to get along very well, as well. When I take an older female out of breeding or even if I have some older rescue girls (maybe eight years old or older) needing to go somewhere, I put them in a community cage together. Males can be more tricky, but as they get older they tend to mellow out and get along with other males better.

Introducing a new chinchilla to an existing pet chinchilla can present some difficulties, and how smoothly it goes depends largely on the chinchillas themselves. Remember that your resident chinchilla may see their cage and play area as their territory. Generally, a younger chinchilla is more likely to accept a friend, as is one who has previously shared a cage.

Obviously, the easiest way to get two chinchillas sharing one cage is to keep siblings together as they have been together from birth. But remember that if you have two siblings, it is really not a good idea to allow them to breed, so ensure that they are either two boys, two girls, or a neutered boy plus a girl.

If you are bringing a strange chinchilla into your home, then you will need to keep it in a separate cage initially. This will give you time to check that the new chinchilla is healthy and will not pass any infection to your resident chinchilla.

When they are playing together ok outside the cage the next step is to introduce one to the others cage:

Introducing same-sex chinchillas is possible and many people have done this successfully, methods for same-sex introductions are similar to those specified above however the introduction itself may take longer.

When I brought Lexie home and introduced her to Chico neither showed any aggression to each other while they were in separate cages. When I let them out together they sniffed noses, started to groom each other a little and looked really sweet.

Then it all went wrong! They wandered away from each other and a little later wandered back, Lexie then took exception to Chico. She chased him mercilessly, the poor boy lost lumps of fur, and she was spraying him too. Considering her behavior Chico was very good, he’s a sweet boy, he simply ran away from her, but after she kept doing this at each introduction he started having a go back. I thought they would never be friends.

Because Chico started to head in the other direction whenever he saw Lexie out of the cage, I took to holding Lexie while Chico took a look at her. This kept him safe, and at the same time allowed Lexie to see that Chico was not going to harm her – I felt that this might be of help if Lexie was working on the basis that attack is the best form of defense.

Another tactic I believe helped was that I got a small container and put some small treats in it. Then I let them out and called them to get the treats. As they approached I maneuvered the treat bowl so that it remained dead center between them, and they were forced to meet nose to nose over the bowl. Given the choice of fisticuffs or treats, the treats won. After so much fur flying it was really good to see them sat near each other peacefully nibbling a treat. In all, it took 6 or 7 weeks before they were living in the same cage, but now they are getting on just fine. 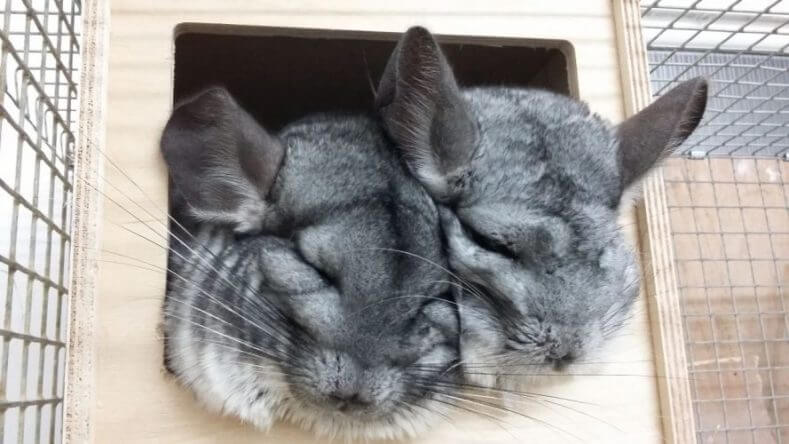 Just One Or Do They Need Companions?

If I Have Multiple Chins Will They Bond With Me?

The bond between you and your chinchilla(s) has nothing to do with how many chins you have. It all depends on how much time and effort (love) you give to each of your chinchilla(s). If you put enough effort into playing with each of them, they will love you and have a strong bond to you.

If they snarl and snap at one another, or of the female sprays at the male, then it is time to separate them before things develop into a full-scale fight.  Allow them a few days (still caging them side-by-side) to settle down, and then try again.

How Long Does It Take For Them To Become Friends

The length of time that they need to accept each other can vary from as little as a day or two to as long as a few months.  Just be patient and don’t try to rush things, compatible pairs usually accept each other in the end.

Is it easy to introduce a new chin?

This depends on the chins’ personalities. Some chins take to their new friends right away and others will not tolerate another chin. There are a lot of factors that can determine whether two chins will be able to be housed together. First is how long your original chin has been alone. Chins that have been housed alone for years are less likely to accept another chin. Also, the sex of the chinchillas is a huge factor. Two adult females are the hardest to introduce to each other, followed by two adult males. Males and females can be paired more easily as adults, but it is still not a sure thing. Introducing two chins is not as easy as it sounds. It can take weeks or months of work before your chins can be left in the same cage without supervision. If you are willing to put in the time, you must remember to be patient. If you rush things and your chins end up having a bad fight, they will hold a grudge and may never become friends. It sounds ridiculous but it is the truth, I’ve seen it happen.

Things To Consider If Your Wanting A Chinchilla As A Pet