When I rescued Jasper, my chinchilla, he was a mess! He had been living in a small plastic dog carrier, inside a van with a woman who smoked. Jaspers fur was dingy looking. He was my first chinchilla so I wasn’t really sure how to groom him. I mean was he going to be like a cat and clean himself? Here is what I quickly learned about my new friend Jasper.

As I was soon to learn, Chinchillas DO NOT clean themselves like cats! Well not exactly! Chinchillas will groom themselves somewhat, but to properly clean their fur and skin they need a dust bath. Chinchillas should be given a dust bath at least once a week. I give my chinchilla a dust bath one to three times a week depending on how much I handle him and how high the humidity is. Too many dust baths and his/her skin can become dried out causing scratching and dry patches.

The Proper Way to Groom Your Pet Chinchilla

If you own a pet Chinchilla, you have to administer dust baths regularly to keep it clean. Remember, chinchillas do dust baths by instinct. They do it every day in the Andes Mountains, which is their natural habitat. By rolling on a layer of volcanic ash, chinchillas can get rid of the all the dirt and oils that accumulate in their fur.

A chinchilla needs dust baths also to satisfy an instinctual need. Chinchillas that don’t get the chance for dust baths are prone to stress. If the fur stays matted and greasy for a long time, the body of the chinchilla can get overheated. During warm climates, it’s imperative that dust baths are administered for 10 minutes every other day. When it’s cold, bi-weekly dust baths should be enough. Also, if you’re worried about the dust from flying around every time the chinchilla rolls around in it, you can fix the problem by covering the cage with sheets.

Keep your chinchilla away from cigarette smoke.

The tar from cigarette smoke can easily accumulate on a chinchilla’s fur. And this can be troublesome to the creature since it is prone to licking its fur every chance it gets. The tar provides health risks for your pet chinchilla. If your pet gets exposed to cigarette smoke, administer a wet bath to get rid of the harmful chemical.

It’s also important to observe if your pet chinchilla has watery eyes during dust baths for it’s a sign that it might have pneumonia or some form of respiratory problem. This might have been caused by chemicals, which can be dealt with by wiping the creature’s nose. If symptoms still persist, it’s high time that you consult a veterinarian.

If your pet chinchilla still doesn’t take the initiative to take dust baths, you can give it a massage until it gets the hang of it. If that doesn’t do anything, it’s possible that the creature might be suffering from an injury, and in such a case, it’s best that you take it to the veterinarian. Or it might just be the heavy texture of the dust, so try buying a chinchilla dust that is lighter in texture. 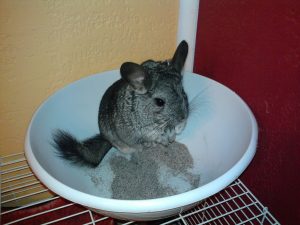 If you want to provide dust baths for your pet chinchilla, it’s important that you buy the bath dust that’s specifically made for chinchillas. The “chinchilla dust” that can be bought from pet stores have the same physical properties as the dust that these creatures use in the Andes Mountains when they groom themselves. This type of dust can get deep into the coat of the chinchilla and can seep into its skin.

The dust comes in contact with all the accumulated dirt and oil and once the dust is shaken off, so are all the dirt and the oil. It is recommended that the bath dust should at least be a couple of inches deep in the container in order for the bathing to be more effective.

There is also Chinchilla Sand, which is simply just a coarse version of the dust., made from the exact same volcanic ash. I use both but use Blue Cloud Dust the most.

As for the container to be used, make sure that it’s bigger than the chinchilla. A smaller one runs the risk of getting tipped over, which will be quite messy what with all the dust. Glass fish bowls or big canisters should do the job. If you can spare the money, a plastic house type container with a round bottom should be more than capable of providing a good “bath house” for your pet chinchilla.

And here’s a fair warning: avoid over-bathing your pet chinchilla lest the creature’s skin becomes too dry. The only good reason to administer more dust baths than is usually necessary is when the climate is hot and humid. Twice a week is the norm when it comes to frequency of dust baths. Also, make sure that dust is cleared away from the cage since chinchillas are prone to using it as a litter box. The ideal time for dust bathing chinchillas is during the evening when they are most active.

If you notice, however, that your pet chinchilla’s fur looks lackluster and moist, you are justified in giving it more than twice a week of dust baths. Each dust bath should last for only 10-15 minutes – nothing more, nothing less. Cut back on the amount of dust baths if you start to notice some drying and flaking.

When To Replace The Dust

The bath dust you purchase from the store can be used several times until it gets dirty enough. You can use a duster to remove the waste that accumulates in the dust particles after repeated use. Once the dust particles get a deeper color, that’s the time when you need to replace it with a new serving of dust.

You might fancy the thought of using a covered bath, but it really won’t make much of a difference because chinchillas love to stamp and roll around, thereby kicking off the dust in many different places. As long as you always use a duster and continue to give your pet chinchilla dust baths on a regular basis, your furry little friend will always be fine.

Keeping your chinchilla fresh and clean isn’t only good for its hygiene; it’s also helpful to their overall well-being. That’s why it’s every chinchilla owner’s responsibility to give their chinchillas regular dust baths.

How To Handle A Chinchilla

How Many Types of Chinchillas Are There?