I’ve have had many people contact me confused with how to work with breeding the Ebony Chinchilla.

So the following information is dedicated to you!

The Ebony was developed by Bowens Chinchilla Ranch in the USA. In 1982, when the Ebony was a relatively new Mutation to the Chinchilla world, it was thought to be a DOMINANT, with regards to breeding and the genetics of the mutation.

Son and daughter-in-law, Bud and Joan, were brought into the business and three chinchilla barns were built in 1959. Each barn measured 60′ by 26′. By this time the ranch had grown to about 2,000 animals. Ed became president of Empress, the national organization for commercial chinchilla ranchers, and both he and his son, Bud, judged many chinchilla shows.

Gary and Margot Neubauer started raising chinchillas in 1968. They were very successful. In 1971 they won Grand Show and Reserve Grand Show against the toughest competition Southern California could muster. Ed Bowen suffered a stroke in 1972, and Gary Neubauer was brought in to manage Bowen’s Chinchillas. Sadly, shortly after that Ed passed away.

Bud Bowen became Empress president in 1976, an office which he retained for four years. Besides guiding the national breeders’ organization, he formed the Chinchilla Industry Council. The CIC is an international organization that is still instrumental in fighting many of the airline regulations as well as animal rights extremists.

Bud turned over the reigns of the ranch operation to Gary. Gary became a partner in the ranch and several years later, the sole owner of Bowen’s Chinchilla Ranch.

In the year 2000, Gary and Margot moved the chinchillas to Anza, California. The Anza facility is much larger than the old ranch and could house many thousands of animals in a climate that is very well suited for chinchilla ranching. Anza is located in a desert mountain area that is above 4,000′. Because of the dry air, evaporative coolers can handle the summer heat. In the winter months, propane heaters ensure that the breeders and weaners at kept at no less than 60 degrees. Underground earth-tubes provided fresh air at moderate temperatures, even in the hottest summer months and the coldest winter months.

At the time, the Ebony mutation was described as follows – The HOMOZYGOUS animal ( full Ebony ) is dark to extra dark from Brownish Black to Jet Black. The HETEROZYGOUS ( Ebony carrier ) animal has a distinct agouti pattern and a grotzen area with lighter sides and darker belly fur.

The source of the information in the above paragraph is taken from ‘Modern Chinchilla Farming,’ by Willis D Parker. 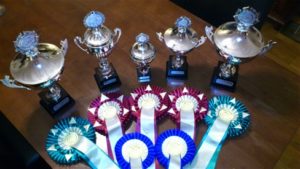 The advice that is given in this article, from the book mentioned above is the same information that was passed on from the original breeders of the Ebony Chinchillas!  These Ebony Chinchillas are from some of the best show winning lines in the USA, and therefore I am taking the breeders advice and acting upon it to keep the quality of the Ebony lines.

The genetic information is therefore as follows – The Ebony is a CUMULATIVE RECESSIVE. This means that as the color is bred together, the color gets darker and stronger with each generation.

The animal was originally thought to be dominant because sometimes the first generation offspring have a white belly and when mated to a Standard would produce white bellied offspring. The problem is that any animal with a possible Ebony gene can produce brown bellied offspring, which obviously is not desirable. Several breeders have had herds ruined because of this.

The most interesting point is that when working with the Ebony you can also have the following occur – If two HOMOZYGOUS Ebony Chinchillas are bred together, they CAN also produce white bellied Standard looking offspring, which has obviously added to the confusion over the years. But these offspring would still be classed as HETERZYGOUS Ebony despite the appearance, so they ARE carrying Ebony.

It should be noted that Chinchillas have two colors of belly fur. White or colored as in Charcoal and Ebony. However, there is a variation, a sort of halfway house where the belly fur is tipped giving the animal a ‘dirty’ appearance. Animals that are bought of bred with this appearance are either Ebony/Charcoal related or are Off Colour.

The most useful cross with Ebony is Beige. This will eventually produce you an animal that is brown furred all over, which is known as the TAN. If you are interested in breeding Ebony, then I would suggest that you use the following method which has been used in the past with successful results.

[alert style=”warning”]But one important rule to remember is that you should never breed closer than half brother to half sister[/alert].

The Ebony is a wonderful mutation, perhaps I am biased, as I have to admit it is one of my favorites! They have unusual traits as explained above. But once you understand how they work, they are quite straightforward to breed.

People tend to get confused with the terms Homozygous and Heterozygous. This is made easier to understand if you think of it in another way. Homozygous Ebony, is a full Ebony, meaning that it has two Ebony genes, making it a full mutation. Then if you think of Heterozygous as being the same as an Ebony carrier, having only one Ebony gene to pass on to offspring. Meaning you have a 50 percent chance of the Ebony gene being passed into the offspring and obviously 50 percent chance of it not being passed on. To give you an example of this, mating a full or Homozygous Ebony to a regular Standard Chinchilla, will give you Heterozygous Ebony young. So in effect, they are Ebony carriers. However, Ebony working differently to other recessives mutations, such a Violet or Sapphire, means that the Hetero Ebony youngsters born, show the Ebony in them, by being a dark grey all over, including the tummy area. With this, it is then possible to work only with dark-colored Hetero Ebonies, and as the cumulative effect comes into play with Ebony, the Heteros will get darker and darker with generations, if you breed the darkest you have to each other. Another way of making the Heterozygous Ebony darker is by the introduction of Black Velvet. This will add a Blacktip to the fur of the animal, usually seen on the face and the back area more so, than on the tummy area. Adding the Black Velvet means that the animal is then classed as a ToV Heterozygous Ebony. The ToV stands for ‘Touch of Velvet.’ This can also be achieved with Homo Ebonies as well, to enable the blackness of the animal to become more intense, more quickly.

The same effect can be used to your advantage when using Ebony with Beige. Breeding a full Ebony to a regular Beige will produce you, Heterozygous Ebony, as shown in the photo above, as well a Hetero Ebony Beiges. With a Beige that is also a Hetero Ebony, the animal looks like a regular Beige, except that the Beige color covers the whole animal including the tummy area. Obviously then if you have used a ToV Ebony to your Beige, then the beige coloring of the offspring may well also become darker. Effectively, you are adding the Black Velvet of your Ebony into your Beige, making it into a Brown Velvet that has the wrap around fur coloring that the Ebony enables. Once you have your Beige/Hetero Ebony, you can breed this to a Homozygous Ebony. Doing this will allow you to produce further Hetero Ebonies, Beige / Hetero Ebonies, Homo Ebonies, and Tans. A Tan is a Beige / Homo Ebony cross. The darker the Ebony you use and especially if you already have ToV in your Beige / Hetero Ebony, will depend on the darkness of the Tan that you breed. Some can end up being dark Beige all over, whereas others are described as Chocolate, as they are a rich Brown color all over. The Tan works in the same way, being that it also has the cumulative feature, so the more generations you work with, will eventually darken if you select darker animals every generation.

So here to recap on the way you can get to work with Ebony, here are the outcomes for colors when breeding.

Have fun working with the Ebony!

Surefire Ways To Tell If A Chinchilla Is Pregnant